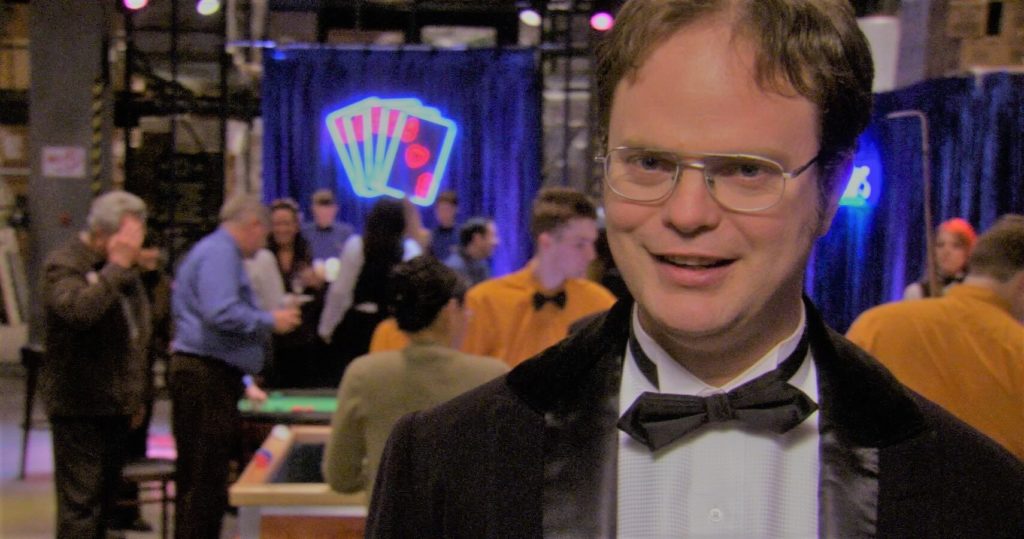 Casino Night, episode 22 of The Office season 2, is one of the greatest episodes in the series. Still a fan favourite after more than a decade, Casino Night is packed with back stories, quirky quotes, and a major appearance by the Queen of Hearts. Michael’s fumbles and foibles and Dwight’s awkward antics are just the beginning of this classic episode.

The episode could have easily been called The Queen of Hearts; Lady Luck and office love triangles abound. Watching The Office characters floundering under the flickering fluorescent lights, or beneath the faux-neon glow of the casino-decked warehouse makes us wonder: which casino game best matches each character, and which would be their favourite game? 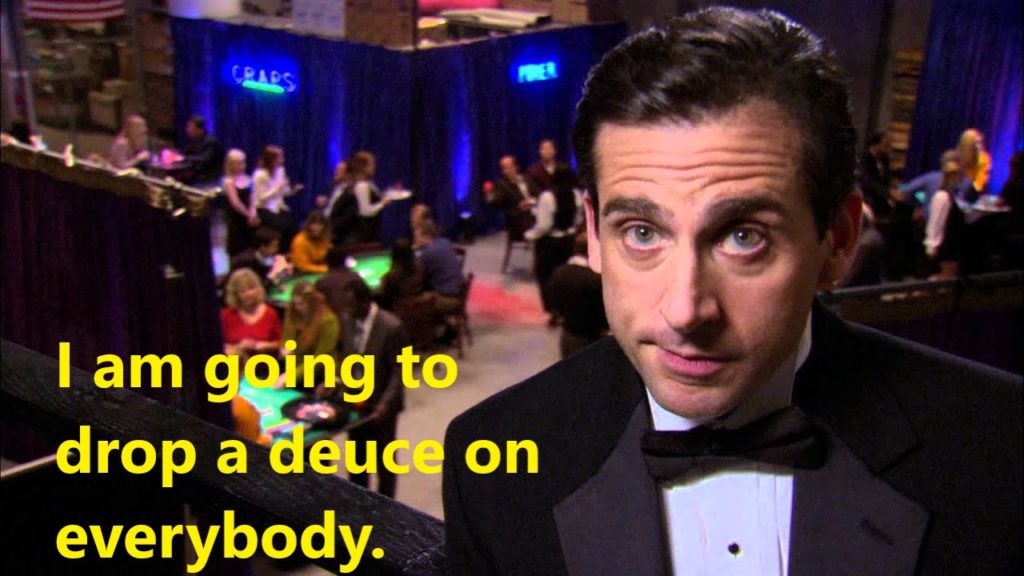 After office manager Michael Scott’s botched affair with Dunder Mifflin Regional Manager Jan Levinson, he decides to begin dating again. But during simultaneous phone calls with his real estate broker Carol and his boss Jan, he somehow manages to invite them both on dates to casino night. He was clearly hedging his bets when he assumed Jan would flatly refuse.

After both women say they would attend casino night with Michael, he informs the ‘camera’ of his fortune. “Two queens on casino night. I’m gonna drop a deuce on everybody.”

The way Michael blunders into situations in a random way suggests that Michael Scott would be a roulette player. He’s always got his eyes on the prize but doesn’t quite seem to understand the truly random outcome of roulette. It’s in the way he drops offensive one-liners with the stuttering ignorance of the court jester. Even his malapropisms are epic. After mentioning that gambling is illegal in Pennsylvania, he claims that it’s all for fun and charity.

“It’s all for charity, and I consider myself a great philanderer.”

Don’t you mean ‘philanthropist’, Michael? Anyway, Mikey’s got the Queen of Hearts on his mind when speaks and when he invites two women on dates. Just as he might wager in roulette, he is hedging his bets. Even if he angers one woman, there’s another one, and he is the winner. Forget the Fibonacci System, this the Scott System.

Where She Stops, Nobody Knows

Speaking of roulette (and love triangles), Pam is very enthusiastic about casino night. She proudly announces that she is an expert in roulette. To which Dwight retorts: “Impossible! Roulette is not a game of skill, it’s a game of chance.”

And then Jim proceeds to wind up Dwight by convincing him he can beat roulette with telekinesis. With a little assist by Pam’s unseen umbrella and a twitching coat rack, Dwight is flummoxed. Again. Don’t mess with Pam on Jim’s watch.

Although Pam later goes on to beat Jim at poker, it is clear to the 5 Star Pokies experts that Pam’s favourite casino game is slots, aka pokies, aka the fruit machines. Pam firmly believes that by sticking with one slot game long enough (Roy) it will eventually pay off.

Throughout her never-ending wedding plans with Roy, Pam fails to see the love jackpot standing right next to her in Jim. Pam keeps on playing the same cold pokie game over and over, and it never pays off.

I See Your Tell and Raise You

Kevin is wearing some flashy bling on his wrist for casino night. Poker enthusiasts may recognize the WSOP bracelet on Kevin’s wrist, but just in case, he makes it clear. “I won the 2002 $2,500 No-Limit Deuce to Seven Draw Tournament at the World Series of Poker in Vegas. So, yeah, I’m pretty good at poker.”

After being soundly trounced later in the evening, he sulks and says to the camera, “I suck.”

Michael also claims to be a master bluffer but runs crying from the table when Toby calls his bluff and wins.

Meanwhile, the real poker player emerges. Jim’s favourite casino game is clearly poker. His entire office days are spent toying with Dwight, pulling him into one prank after another, then fleecing him. All with a straight poker face.

On casino night, Dwight thinks he’s spotted Jim’s ‘tell’ and Dwight thinks Jim has good cards whenever he coughs. After folding hand after hand to Jim, the winner confides to the camera, “It’s the weirdest thing. Every time I cough, he folds.”

Dwight claimed he has the acute ability to read people and spot their tells, naming Jim’s alleged tell. But the old poker adage rings true in Dwight’s case: if after 30 minutes you haven’t spotted the sucker at the table, you’re the sucker.

But Jim’s poker game is eventually taken down by Pam because he let his guard down. The Queen of Hearts is messing with Jim’s chi, and the champ goes down after Pam overpowers Jim’s poker face with her smile and wink.

Fun fact: Kevin may have lost at poker, but he has an ace up his sleeve: his garage band Scrantonicity (after The Police’s Synchronicity), is later chosen to play Pam’s wedding. If it ever happens.

Give Me the Dice

Whether he craps out or not, Dwight keeps rolling the bones. Therefore, Dwight’s favourite casino game is craps. Craps is a game where one shooter commands the centre stage while everyone cheers him on. Sadly, in the Dunder Mifflin office, Dwight is a legend in his own mind. Try as he will, he struts and flails and frets while he tries to be the centre of attention. And the office crew roll their eyes in response.

But for some strange reason, Dwight was on fire at the craps table on casino night. With the simple command ‘give me the dice’, Dwight was on a roll. Literally.

Office grump (and secret Dwight crush) Angela walks up to the table and asks what’s going on. Explaining the name of the game was craps and he needed to roll an eight, Angela said, “Then roll an eight.”

He shoots, he scores!

Dwight rolled his eight and thanked his Lady Luck by kissing Angela on the cheek. She responded by slapping him in the face and marching away. Both had smirks on their faces though. That pesky Queen of Hearts never rests.

Not everyone embraced the idea of hosting a casino night in the Dunder Mifflin warehouse. Toby, Angela, and Darryl from the warehouse had to put in their two-cents worth.

Toby from HR tried to intervene in Michael’s insane plan to invite boy scouts to casino night to receive their charitable donation.

“Actually, I didn’t think it was appropriate to invite children since it’s… You know, there’s gambling and alcohol, and it’s in our dangerous warehouse and it’s a school night… And, you know, Hooters is catering. You know, is that enough? Should I keep going?”

Toby is not alone in his opinions on casino night. Ever a buzzkill and stickler for the rules, office grump Angela poo-poos the whole idea of casino night, even for charity.

“We are giving money that has been gambled,” Angela said, “Why don’t we just deal drugs or prostitute ourselves, and donate that money to charity?”

“Mike, I am not having fire-eaters in a paper warehouse.”

“But I already paid the deposit, Darryl! Do you know how deposits work?”

Then Darryl proceeds to diffuse the quarrel with some ‘hood slang’ and a weird handshake. Later in a side shot, Darryl admits that he made up the slang and taught Michael just to mess with him:

“I taught Mike some, uh, phrases to help with his interracial conversations. You know, stuff like, “Fleece it out.” “Going Mach five.” “Dinkin’ flicka.” You know, things us Negroes say,” Darryl confided.

Fun fact: actor/comedian Craig Robinson has been seen haunting the hallowed halls of the World Series of Poker in Las Vegas. No doubt he goes Mach 5 in real life.

Casino night went off without a hitch. And without boy scouts, fire-eaters, drug deals, or self-prostitution. After stealing chips all night (and admitting to the camera he is a kleptomaniac), Creed winds up winning the mini fridge from Bob Vance of Vance Refrigeration.

“Thanks. I’ve never owned a fridge before,” Creed quipped while picking up his gift.

Casino Night ends with Jim professing his love for Pam, followed by the Big Kiss scene. Both just stand there in their confusion. Pam knows she is engaged to Roy, and Jim knows Pam won’t date him.

But fans of The Office know the Queen of Hearts isn’t done with Jim and Pam.

Which casino game do you think The Office characters would play? We know Angela would probably say ‘none’ and just continue counting beans for Dunder Mifflin. What about Creed or Darryl? What’s their favourite casino game? Let us know your thoughts on facebook or twitter!

I enjoy writing about gambling, movies, tv shows, and funny stories. I am very interested in sports.