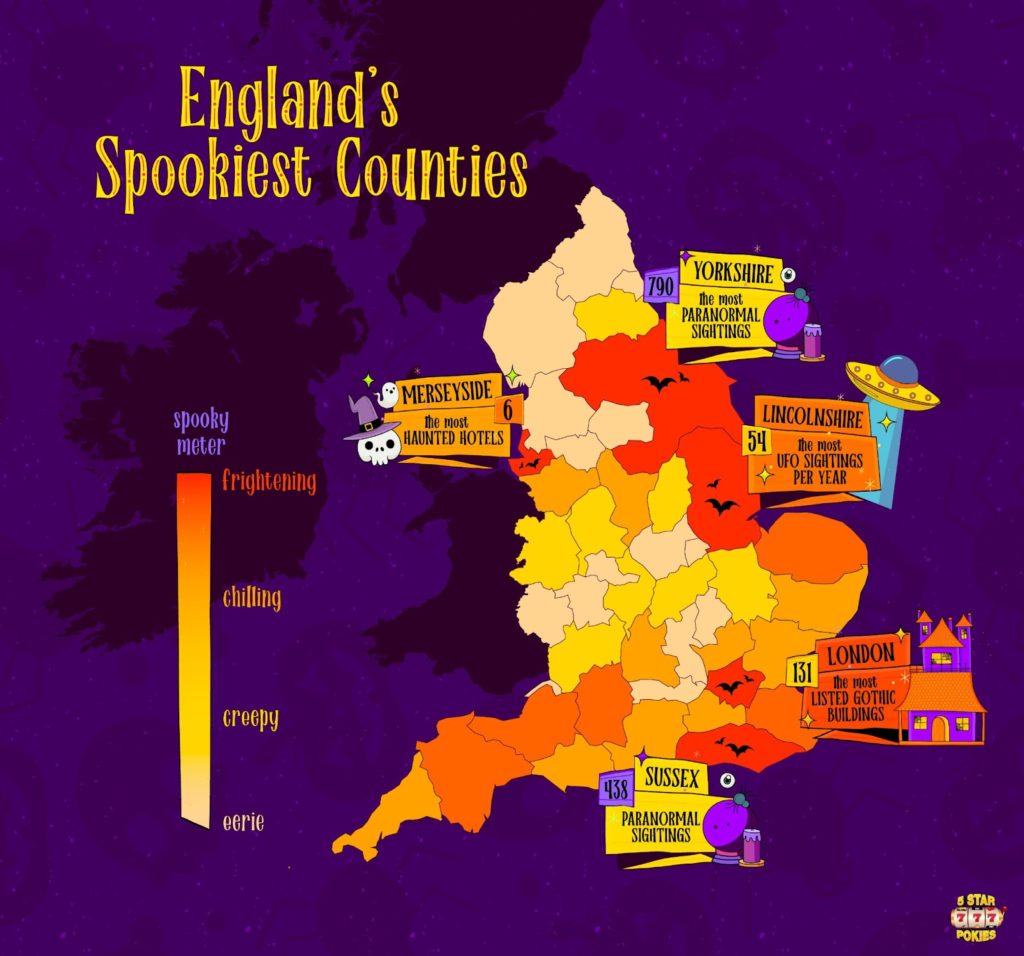 With centuries of bloody history, towns across England are some of the most haunted in the world. From small villages to large cities populated by the spirits of dead soldiers and witches – we have calculated the spookiest counties in the country.

We have added together each English county’s paranormal reports, UFO sightings, haunted hotels, and listed gothic buildings to create a “spooky ranking index”.
Our data shows that London is the spookiest county in England, followed by Yorkshire, Sussex, Merseyside, and Lincolnshire. 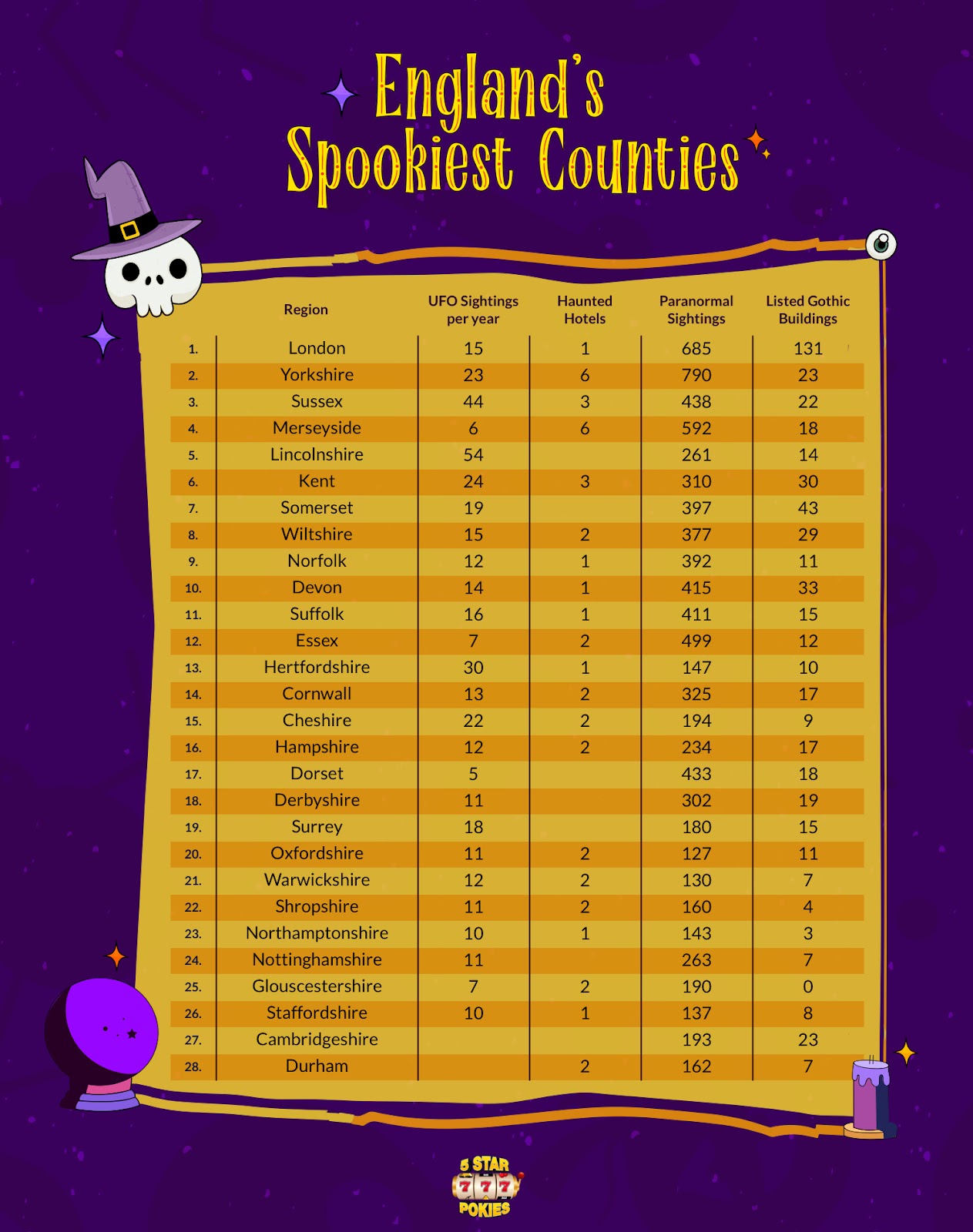 London received the score “frightening” on our spooky meter, having ranked highly in each of our categories. A shocking number of 685 paranormal sightings have been reported from England’s capital city on The Paranormal Database.

One of the most legendary ghost stories in London includes the Enfield Haunting, a chilling story of a poltergeist tampering with a family in their North London home in 1977. It was famously recreated in the American horror film The Conjuring 2 in 2016.

London is also home to haunted The Georgian House Hotel, which has been the site of repeated reports of resident ghosts, including multiple children and an old man. The reports came in 1989, 1991, 1998, 2007, and 2008. There are also a whopping 131 listed gothic buildings – the highest of all counties – that are certified creepy at nighttime.

Yorkshire is number two on our spooky rankings. It leads the board with the most paranormal sightings of all regions in the UK at a spooky 790 reports.

Ghosts, Folklore, and Forteana report in Yorkshire date back to ancient ages all the way up to the present day. It includes one report of Poltergeist sightings in Barnsley from 2014-2020, where moving objects were caught on CCTV multiple times in a funeral parlour.

Yorkshire is also home to 5 haunted hotels. This includes the infamous The Golden Fleece Hotel, known as York’s most haunted pub and one of Britain’s most haunted venues. Built in 1503 it allegedly has 15 ghosts. Many guests claim to have seen Lady Alice Peckett – wife of John Peckett, who used to be the mayor of York and the owner of the hotel.

Sussex comes in third on our table, being well rounded in all of our categories. There have been 44 UFO sightings in the last year and 438 paranormal sightings in total. It is also home to 22 listed gothic buildings and 3 haunted hotels.

The Mermaid Inn in Rye, East Sussex is also one of the most famous haunted hotels in Britain, attracting thousands of travelers a year. It features secret passageways, a Priest’s Hole, and claims at least 5 haunted bedrooms. Ghostly tales include those of a lady in white or grey, a haunted rocking chair, and a pair of dueling gentlemen. The Inn was featured in the first season of the TV show ‘Most Haunted’.

The fourth most haunted county is Merseyside. Merseyside has a frightening 592 reports of paranormal sightings.

The region is also known for being home to 6 haunted hotels and 18 listed gothic buildings. Liverpool city center hotel, the Adelphi is in a Grade II listed gothic building and is dubbed as “easily one of the most haunted in the country” on HiggyPop. Guests and staff have claimed to have spotted spirits in the hotel.

Old Lark Lane Police Station in Liverpool is well known for hosting ‘Ghost Hunts’ as it is claimed to be one of the country’s most haunted and infamous old police stations.

Lincolnshire leads our board with a scarily high amount of UFO sightings – with 54 being reported in the last year.

In July 2020, a Lincolnshire man captured video footage of a possible UFO flying in the sky with flickering lights in Bourne. Another man in Ingoldmells spotted a lantern-shaped image in the sky in October 2019. He claimed it stayed in that position for a long time before shooting up very quickly.

Both reports have been unexplained since.

I love everything about sports. I used to play soccer for almost 10 years but recently I have joined a local volleyball team that I’ve fallen in love with.

PrevPreviousWhos fans are more stressed the AFL or the IPL?
NextDropping a Deuce: Favourite Casino Games of The Office CharactersNext