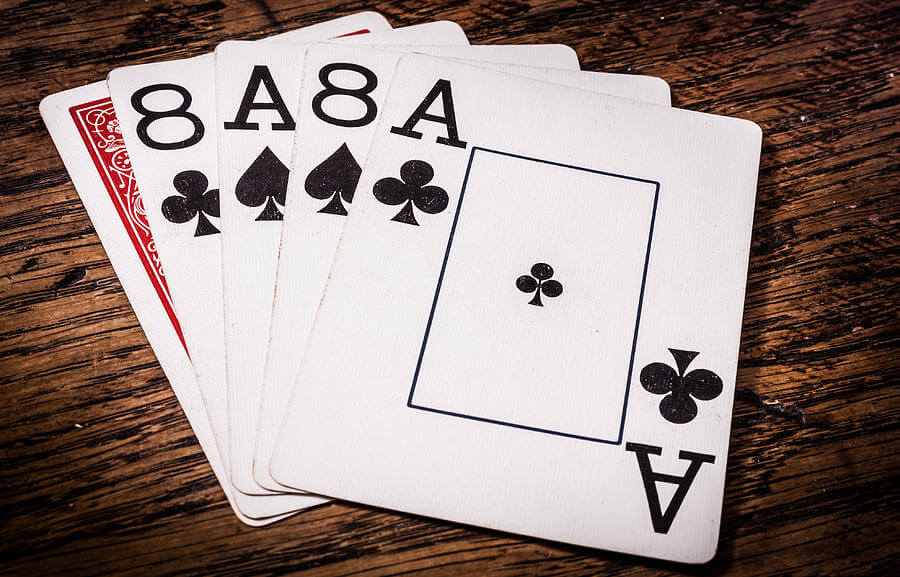 The description and make-up of one of the casino’s most famous games, Dead Man’s Hand, keeps on varying with time. The exciting and captivating game has a vast and robust history in the cycles of gambling. Dead Man’s Hand Poker has seen an all-round revolution and mash-up over the year, with different variations emerging regularly all over the world.

The origin of the phrase

Currently, in the gaming sphere, the phrase Dead Man’s Hand has a seemingly different connotation, referring to an almost different and unique game. The phrase, in a game of poker, refers to a two-pair poker hand comprising of black eights and the distinguishable black aces in a game of poker. The black eights and black aces have a traceable history in gambling. Together with an unknown hole card, the eights and aces have a connection to Wild Bill Hickock. Jack McCall tragically and in cold blood shot the legendary and heroic Hickock in the back of the head. The unfortunate murder incidence reported to have occurred on 2nd august 1876, took place in Dakota Territory.

At the time of his death, Wild Bill Hickock was enjoying a game of poker at the then famous Nuttal & Mann’s Saloon when an altercation occurred. The joint, initially located in Deadwood, Dakota Territory, was a popular spot for gamers. The alteration between Hickock and the already seemingly drunk McCall followed McCall’s losses in the poker game. Jack McCall felt insulted and hurt after a massive loss following a round of poker game.

On 2nd August 1876, during a game of poker, McCall pulled his revolver and shot Hickock. During the time of his death, Wild Bill Hickock was holding two black eights and a pair of black aces. The act of Bill Hickock dying holding the cards got the connotation “Dead Man’s Hand.” The cards in Hickock’s hand at the time of his death were all incidentally black suits. Reports indicate that Hickock had a premonition about his death and had initially told his friends that he would die in Deadwood.

Reports show that Neil Christy retrieved the cards from Hickocks at the time of his death and handed them to his son. Reporting to a friend of the finding, Christy’s son said that the cards included; the ace of diamonds with a heel mark on it, clubs, and spades. The other cards were the queen of hearts with a drop of Hickocks blood on it and the ace of clubs.

The journey behind the ‘dead man’s hand’ phrase

The expression and phrase “dead man’s hand” goes way back into history, with the earliest mentions in the 19th and 20th century. The initial connection of the phrase to the Old West folk, Hero Wild Bill Hickock is recorded around the 1920s.

Records indicate that in 1886, one of the earliest detailed references to the expression ‘dead man’s expression’ was in use. The description suggests that the phrase referred to a “full house consisting of three jacks and a pair of tens.”

The expression’s use in a game of poker changed over time. In a 1903 Encyclopedia of Superstition, Folklore and Occult Sciences, the phrase describes Jacks and sevens. The change in meaning and reference is also exhibited by Edmond Hoyle in 1907, representing Jacks and eights.

It was only until 1926 when the solidification in players parlance descriptive use of the dead man’s hand expression in poker. The 1926 solidification of the phrase in gamers parlance results from Frank Wilstach’s publication titled Wild Bill Hickock; The Prince of Pistoleers. Gamers playing poker currently uses the phrase in the description of two pairs, aces and eights.

Current use of the expression ‘dead man’s hand’

The expression has also remarkably featured in various TV shows. An area of popular culture that the phrase Dead Man’s Hand massively features is in the songs. Some of the renown songs featuring the words include; Ha Ha Tonka’s Dead Man’s Hand, Motorhead’s Ace of Spades, Bob Dylan’s Rambling, Gambling Willie and Uncle Kracker’s Ace & Eights among many more songs.
The use of ‘dead man’s hand’ in popular culture stems from the dramatic history and origin of the expression. Many artists find inspiration from the phrase, especially with its relation as an ominous sign of impending danger.

In a western-themed collectable card game known as Doomtown, the phrase ‘dead man’s hand’ features widely. The feature is the highest rank in the game, while the Jack of diamonds serves as the fifth card.

Dead man’s hand expression has a lot of significance in gaming cycles. The unique phrase also finds its use by the law enforcers, featuring in various police department’s insignia. The extensive use of the expression gives it a lot of significance, not only in the gaming sphere. The legend of Wild Bill Hickock continues to live large in the use of the phrase ‘Dead Man’s Hand’ in popular culture and other spheres of our lives.

The use of the dead man’s hand in poker

Currently, as indicated earlier, the dead man’s hand as used in a poker game refers to a two pair of black aces and black eights. Having a combination of the ‘dead man’s hand’ cards in your possession during a round is considered unlucky. The belief stems from the history behind the set of cards, going back to Wild Bill Hickock murder. In a poker game, gamers consider it unlucky to hold the cards and have a chance at winning the pot during a game round.
When playing your poker games, watch out for your combinations of cards not to get the unfortunate “dead man’s hand.” Getting a combination of the dead man’s card will spell doom for your poker game’s chances winning the pot, a belief firmly held by many gamers.

The Dead Man’s Hand expression finds its use widely in poker games across the world. The phrase has undergone many changes over the years, to emerge with its current meaning. The Dead man’s hand in a game of poker currently stands for a two pair of black aces and black eights. The term “dead man’s hand” has a remarkable yet dramatic history connected to the murder of Wild Bill Hickock. Getting a combination of the cards relating to the dead man’s hand during a poker game spells lousy luck to the player.